Venom: There Was Gonna Be Carnage

Hello everyone, this is Aaron aka Bizarnage and today I wanted to take a look back at the almost two year old Venom movie and discuss the original plans for the film with an exclusive image and interview from one of the SFX team members to get some definitive answers, enjoy!

A Venom movie has been the talk of a literal decade ever since the release of Spider-Man 3. Plans fell through with The Amazing Spider-Man series, and with Sony teaming up with Marvel to introduce a third brand new Spider-Man into the MCU, Sony just decided to make a Venom film on their own for some extra side cash. 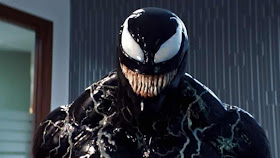 If you’re going to have Venom in his own stand out movie with no Spider-Man, who would be his antagonist then? The most obvious choice was Carnage, and that’s exactly what Sony had planned as the evidence will show. Besides the occasional rumor of the movie being titled Venom: Carnage or something among those lines, our first bit of concrete evidence is Tom Hardy and his Instagram page. 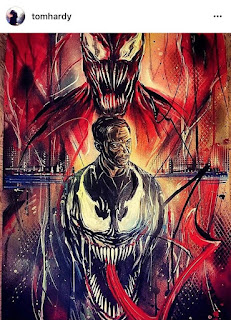 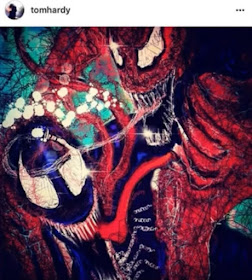 In January of 2018, Tom Hardy posted these two images depicting Venom and Carnage from unknown artists and deleted them shortly after (something he does to this day and I would love to know why). Our next piece of evidence wasn’t exactly crystal clear at the time, but will make since when we have the full picture. Merchandise. 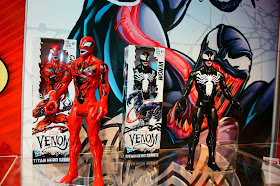 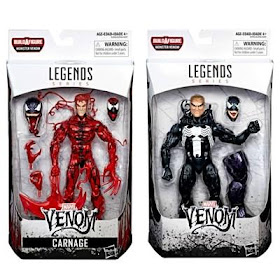 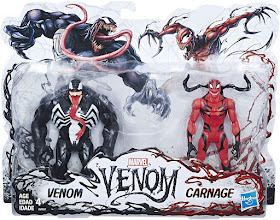 In February of 2018, the New York Toy Fair kicked off with Hasbro a dedicated section to Venom. Now for those that are unaware, there is some unknown deal going on between Sony and Marvel where toy rights are pretty scrambled which basically seem to indicate that Hasbro is unable to make figures for the Venom movie series, but Venom is one of Marvel’s biggest cash cows, so a line of Venom toys were shown off to release just in time for the movie to release, and what you’ll notice is that these toys contain Venom and Carnage with Riot nowhere to be seen. WalMarts and FiveBelows were also releasing Venom and Carnage posters in time for the movie as well. Get ready, here comes the damming evidence. 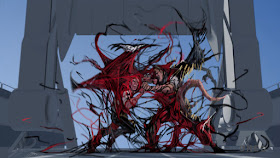 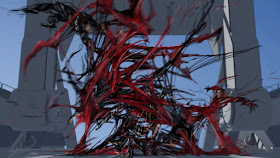 The Venom movie released that October with no Carnage to be found, Venom fought against Riot (arguably the least interesting of Venom’s kids), and we got a Cletus Kasady stinger at the end. The very next year in 2019, artist Paolo Giandoso would post a number of concept art to his ArtStation depicting the final battle we see in the movie between Venom and Riot except in his artwork Venom is battling Cletus Kasady/Carnage. It’s amazing stuff, I’ll post a link to his page, please check it out. That’s not all though! We also have some early CGI work depicting Carnage as well. 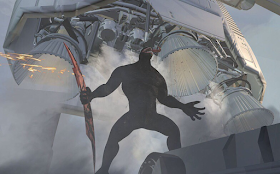 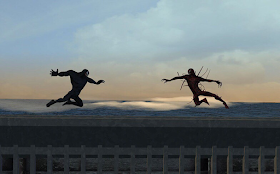 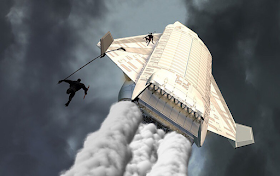 “Previs” is a term that’s short for “previsualization.” Basically, it’s the early idea of a CGI scene that’s usually done before filming even begins but after concept art is created. In this article, Javier Lopez-Duprey and Jourdan Biziou discuss their work with the movie and discuss the Venom vs Riot scene, but if you scroll down you’ll see the previs scenes have Carnage in place of Riot! Wanna know what the craziest part is? This interview was published on October 24th, 2018! Just a few days after the movie came out! And it flew completely under the radar for the most part! But that’s not all folks.

A few days ago I had a friend who shared with me another previs artwork with a clear shot of the Carnage model and gave me the name of the artist. So I decided to ask them some questions to see what they could tell me about the swap. They wished to remain anonymous but told me while they couldn’t show me more pictures of the scene, they did let me know that Sony was flip flopping on whether they wanted to save Carnage for a sequel or not, but by the time they finally decided to switch him with Riot at the last minute, the previs had already been done and there was no time to switch the Carnage and Riot models out! They also tell me that Sony wanted to really focus on the relationship between Eddie and Venom in the first film, and that introducing Carnage on top of that would have taken away from it.

So from all this we can gather the full picture:
1. Sony originally plans for the Venom movie to be about Venom vs Carnage, early rumors could have been true! This leads to Tom Hardy’s cryptic Instagram posts.
2. Merchandising teams take this info and plan Venom and Carnage toys for the movies release.
3. Concept art and Previs art of Venom and Carnage are created but Riot’s last minute inclusion throws things off.

That’s everything! What do you guys think? Sony might have been cautious at first whether a Venom film would’ve succeeded at all and probably thought including Carnage in the mix would’ve been helpful to put butts in seats opening day, but with the movies success and Venom: Let There be Carnage releasing in June of 2021, it was probably the right call to wait!

June 2nd, 2020 Update!
While working on another project, I stumbled upon background concept art by Stephan Martiniere that depicts Carnage fighting Venom in the Life Foundation. Seasoned Venom fans with keen eyes might notice that those are actually the Kotobukiya Carnage statue and what seems to be an edited ARTFX+ Venom statue. It’s not uncommon for background concept artists to insert other artwork of characters into their work, but still interesting none the less!
Bizarnage
‹
›
Home
View web version